Bollywood Society » Dictionary: All that you should know about this Bengali drama movie
Movies

Dictionary: All that you should know about this Bengali drama movie 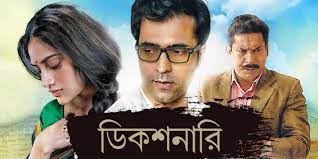 Dictionary is a Bratya Basu-directed Bengali-language drama movie produced by Firdausul Hasan as well as Prabal Halder. Prabuddha Banerjee wrote the music. The movie’s plot is inspired by Buddhadeb Guha’s tale, Baba Hoya and Swami Hoya. On February 12, 2021, the movie was released in cinemas.

Makar Kanti Chatterjee (Mosharraf) is a self-made businessman with a semi-educated background who tries hard but frequently fails to communicate in English. On the other side, his brother-in-law Suman (Arna) falls in love with a woman (Nusrat) who is married to Ashoke Sanyal, an introverted forest officer (Abir). The movie’s plot revolves around these two intertwined yet separate storylines.

On the backdrop of the arid woodlands and peaceful locales of southern Bengal, Prabuddha Banerjee’s background soundtrack provides some respite to Smita’s storey, with melancholy folk songs that perfectly fill the vacuum in her and Ashoke’s life.

Bratya Basu, who is the Education Minister of West Bengal, has a mind-blowing direction.

This film is based on the short stories “Baba Hoa” and “Swami Hoa” by Budhhodeb Guho.

What a clever juxtaposition of two stories by Bratya Basu!!!!

In general, dictionaries serve as a repository of unfamiliar terms that academics study and discover. However, dictionary definitions are not always accurate. Life, on the other hand, is nothing more than a dictionary.

But there’s one thing to remember: males who only watch hip hop movies with visual effects, action, and a lot of commercial components should avoid this sort of film, which educates us about psychological difficulties surrounding love…

That’s all there is to it.

The characters in this film – Maharkranti Chatterjee, Ashoke Sanyal, Smita Sanyal, Professor Suman, Nabanita, and Sreemati Chatterjee – will live on in my heart forever…!!

Also Read: Hero (2015): All you need to know about this Bollywood movie

Bhoomi (2017): All you need to know about this action drama movie