When was Bollywood diva Alia Bhatt shooting for RRR? 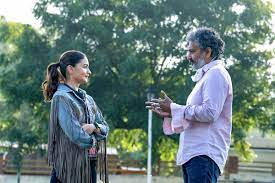 Alia Bhatt and Ram Charan star in SS Rajamouli’s RRR. Jr NTR, Ajay Devgn, and Shriya Saran also feature in the film, which is her Telugu and southern debut.

Alia Bhatt, who just joined the sets of SS Rajamouli’s next magnum opus RRR, has spoken out about her first experience working in Telugu cinema. She remarked in an interview that she has known her lines for so long that she can recite them in her sleep.

Alia is coupled with Ram Charan in RRR. Jr NTR, Ajay Devgn, and Shriya Saran also feature in the film, which is her Telugu and southern debut. The movie’s shooting restarted in October, over eight months after it had been put on hold. Alia began filming earlier this month. She talked about her experience working on a Telugu production in an interview with DNA. “Shooting for this movie was a very new experience for me since, in addition to Hindi, I had to shoot in Telugu, which is a language I’m not familiar with,” she explained.

“I truly lived with the lines for a year and a half,” Alia said further. I was saying my lines in my sleep by the end of it. For breakfast, lunch, and supper, I was waking up and saying my lines. I’m ecstatic and honoured to be a part of this project.

To collaborate with two highly outstanding as well as larger-than-life performers Junior NTR and Ram Charan Tej, and also to be helmed by Rajamouli sir.”

RRR will have to be a fictitious narrative set inside the pre-independence era of the 1920s, and it will be based upon the lives of two genuine heroes and well-known revolutionaries — Alluri Sitarama Raju and Komaram Bheem.

Also Read: What is the real age of Alia Bhatt?

When will Kartik Aaryan start shooting for pilfer Singh?