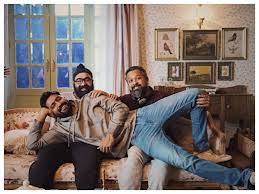 Vicky Kaushal is one of Bollywood’s most promising and gifted performers. In films such as Uri: The Surgical Strike, Masaan, and others, the actor has demonstrated his acting talent. Because of his beautiful appearance and excellent acting abilities, he has a large fan base. He occasionally posts photos and videos on Instagram to give his admirers an insight into his life. Vicky also gives us a sneak glimpse at his upcoming project.

He’s now filming a film with Triptii Dimri in which he also appears. Anand Tiwari is the director of the film. He uploaded a selfie with director Anand Tiwari and producer Amritpal Singh Bindra on Instagram. He penned a funny caption while uploading a post. Vicky Kaushal admirers also reacted positively to his tweet. “Cutie,” a fan wrote. In the comments section, others left heart emojis.

We have already provided unique facts about the film. “Vicky Kaushal and Triptii will be shooting at a Mumbai studio for a month, after which they will head to Delhi and a few other locations in North India. However, the makers will do one final recce there before they roll with their second schedule. The film also features Ammy Virk in a pivotal role. It’s an extremely entertaining and unique script, but also has an important message for the audience. The team did a few readings before they started shooting for the film,” according to a person close to the situation. Vicky Kaushal and Triptii are working together for the first time on a project.

Vicky Kaushal’s next project is Govinda Naam Mera, in which he partners with Kiara Advani and Bhumi Pednekar. Shashank Khaitan will direct the film, which will be his second collaboration with Bhumi Pednekar following Bhoot Part One: The Haunted Ship. On June 10th, Govinda Naam Tera will be released in theatres.