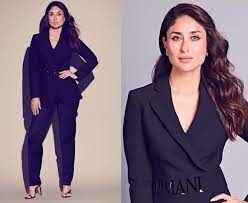 Kareena Kapoor Khan is a Bollywood actress noted for her outstanding acting abilities and flawless fashion sense. The actress never misses an opportunity to amaze the fashion police with her style choices. While Kareena is quite active on social media, she frequently rewards her admirers with breathtaking photos of herself, leaving them in awe of her panache. And now, Bebo is making headlines once more after sharing some amazing photos of herself dressed in all black.

Kareena Kapoor Khan was dressed entirely in black in the photo. Her outfit consisted of a stunning black top and black pants. Bebo wore her hair down and added golden earrings and black shoes to her ensemble. She looked flawless in her make-up and exuded the ultimate boss woman vibes. Kareena is sporting an all-black ensemble as she prepares for the United Nations Young Changemakers Conclave. Soon after, celebrities like as Sonam Kapoor Ahuja, Karisma Kapoor, Neha Dhupia, and others showed their support for Kareena. Ekta Kapoor commented in the comments section, “How r u looking this good n this thin sooooooooopeerrrrbbbbbbbbbbb”.

In the meanwhile, Kareena Kapoor Khan will next be shown in Laal Singh Chaddha, a film starring Aamir Khan. The film is the official Bollywood version of the Hollywood classic Forrest Gump, directed by Advait Chandan. She’ll also be making her OTT debut shortly in Sujoy Ghosh’s forthcoming film, which further stars Jaideep Ahlawat and Vijay Varma.