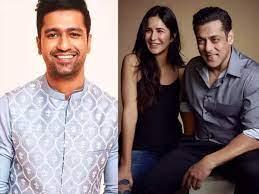 Salman Khan has made a major choice for the filming of ‘Tiger 3’ in the midst of Katrina Kaif and Vicky Kaushal’s imminent wedding rumours. According to recent sources, the film’s revised schedule, which was set to begin in November, has been postponed due to Katrina’s and Vicky’s wedding.

The ‘Tiger 3’ shoot has indeed been delayed until January, following Vicky-wedding, Katrina’s according to Bollywoodlife.com. Not only that, but Salman Khan is said to have offered assistance to close buddy Shah Rukh Khan.

According to reports inside the leading daily, these two legends were supposed to shoot a crossover for ‘Tiger 3’ and ‘Pathan,’ but SRK decided to spend quality time with his son Aryan Khan, who was recently freed on bail. As a result, Salman is said to have pushed the release date back to December.

Salman Khan is heavily promoting his film ‘Antim: The Final Truth.’ The Prem Ratan Dhan Payo actress would be seen in a turbaned ensemble and therefore will share screen time alongside Aayush for the very first time. That’s not everything. In the film, Salman and Aayush will also be pitted against each other. This year’s Antim: The Final Truth will be released on November 26. Shah Rukh Khan, on the other hand, would next be seen on the ‘Pathan.’ Deepika Padukone as well as John Abraham would act in the major roles in Siddharth Anand’s film. According to reports, the actor would make cameo cameos in movies including as Ayan Mukerji’s ‘Brahmastra,’ which stars Ranbir Kapoor and Alia Bhatt.

Also Read; Wanted: All you must know about this Blockbuster Salman Khan movie