Bollywood Society » On his OTT debut with Bear Grylls, Ranveer Singh told Deepika Padukone that my experiences as an actor are flat
Featured

On his OTT debut with Bear Grylls, Ranveer Singh told Deepika Padukone that my experiences as an actor are flat 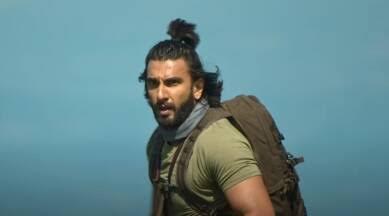 The Netflix premiere of Ranveer Singh and Bear Grylls’ adventure series “Ranveer Vs. Wild” is scheduled for July 8.

One of the most gifted and promising performers in the movie business is Ranveer Singh. The Dil Dhadakne Do actor is now making headlines, and for good reason—about he’s to make his OTT debut alongside the British adventurer, author, and television personality Bear Grylls.

The much-awaited Ranveer vs. Wild with Bear Grylls trailer was released on Friday.

In the trailer, Singh is seen fending for himself alongside Bear Grylls while searching for a specific flower for his wife, the actress Deepika Padukone. The Simmba actor discussed his OTT debut at the trailer premiere event and expressed his feeling that his life had somewhat stagnated and become the same. He continued by saying that he has worked for 12 years and has managed to survive. “You keep doing movies, you attain success and you have AC in your house, car. You are shooting in an AC studio with a five-star director and then go back to sleep. You need to have new experiences. I was discussing with my baby (Deepika Padukone) that my experiences are flat. As an actor, you need to have different experiences so that you can improve. I was feeling I am getting into a comfort zone. When this offer came, I just grabbed it with both hands,” Singh said.

Ranveer is now developing a number of intriguing films in addition to this. In addition to Shalini Pandey, Boman Irani, and Ratna Pathak Shah, he most recently appeared in Jayeshbhai Jordaar. With Alia Bhatt, Dharmendra, Shabana Azmi, and Jaya Bachchan, he will next appear in Rocky Aur Rani Ki Prem Kahani. He’ll also get to see Cirkus again, played by Rohit Shetty. Ranveer also stars in Anniyan, the Hindi version of the Tamil film.

Pankaj Tripathi, has reached a stage of saturation in his career