In recent images, Sonam Kapoor wears an ivory drape to show off her baby bulge 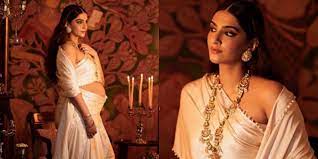 Last month, Sonam Kapoor surprised all of her fans by announcing her first pregnancy with husband Anand Ahuja. Everyone in their family is looking forward to the arrival of the baby. Anil Kapoor, Sunita Kapoor, and Rhea Kapoor all expressed their delight on social media following the announcement. The actress just made her first public appearance since announcing her pregnancy, and now another photo of her dressed as an angel and flaunting her baby belly has surfaced on the internet, and we’re sure you won’t be able to take your gaze away from her.

Sonam Kapoor is dressed in an ivory saree-like outfit with beads at the border in the photo. The actress wore huge circular earrings and a necklace with her hair open. With her outfit and eye makeup, she gave off a throwback impression. Sonam looked like an angel in the first photo, posing while displaying her baby belly. She sat on a chair and looked like royalty in the next photo. We have to agree, she did appear like a genuine Indian beauty, and people flocked to the comments section to express their admiration.

In the meantime, a source close to Sonam Kapoor and Anand Ahuja has disclosed that she is four months pregnant. As a result, she’ll most likely give birth around the third week of August 2022. Sonam Kapoor has been missing in action and hasn’t been seen much in recent months, and it’s been speculated that this is the reason. Sonam and Anand uploaded a series of monochromatic photos of the actress laying her head on Anand’s lap while they both caressed her baby tummy with a huge grin.