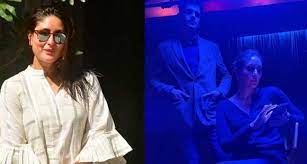 For the first time, Kareena Kapoor Khan and Vijay Varma have cooperated for Sujoy Ghosh’s movie DSX, and they appear to be having a blast. Last month, the cast began filming the murder mystery, and Bebo teased fans with behind-the-scenes photos from the set. Kareena Kapoor Khan had recently made waves after she posted a BTS photo with Vijay in a humorous Instagram post in which she asked if the latter was peering at her phone.

And now, the Gully Boy star has admitted to peering into Bebo’s phone, even revealing who sends the Jab We Met actress the most texts. It’s worth noting that Kareena had texted the article as, “Acha Vijay are you trying to read my messages? @itsvijayvarma #DSX Shoot”. To this, Vijay Varma revealed that Bebo sends most of the texts to her husband Saif Ali Khan and the nanny of her kids. He wrote, “Yeah most of them were from someone called nawaab sahab and nanny”. Soon, Bebo replied saying, “@itsvijayvarma ok so then you were reading my messages”.

However, the film directed by Sujoy Ghosh is indeed a cinematic version of Japanese novelist Keigo Higashino’s novel The Devotion of Suspect X. Apart from Kareena and Vijay, Jaideep Ahlawat will play the protagonist in the film. Kareena’s OTT debut will be her first, and she is looking forward to returning to acting after the birth of her son Jeh. Kareena is now preparing for the premiere of Laal Singh Chaddha, which also stars Aamir Khan and Naga Chaitanya.

The film, directed by Advait Chandan, is set to enter theatres on August 11th of this year.

Also Read: Kareena is also set to make her OTT debut alongside Jaideep Ahlawat and Vijay Varma in Sujoy Ghosh’s next.

Ranbir Kapoor discusses Brahmastra, saying that he and his co-stars “had the potential to build our own Marvel”

Kartik Aaryan discusses how he keeps his friendships with Ranbir Kapoor, Abhishek Bachchan, and others going