Vijay Deverakonda and Liger co-star Ananya Panday will appear on Koffee with Karan 7? 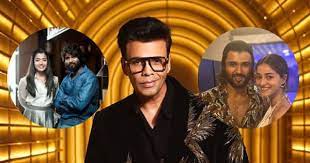 Karan Johar has revealed that a new season of his renowned celebrity talk programme Koffee With Karan is on the way. KJo’s statement sparked a social media frenzy. Season 7 is slated to feature some of Hollywood’s biggest names. The fun doesn’t stop there. Fans of the popular conversation programme will be treated to new surprises. According to recent sources in India Today, the popular actor Vijay Deverakonda will star in the next season.

As the news portal’s sources, “Vijay Deverakonda has made it to the guest list for Koffee with Karan 7. In most probability, he will be appearing with Ananya Panday, his Liger co-star. Given that the chat show will go on air in and around Liger release, this will be an ideal pair. However, there were discussions on if Rashmika Mandana might join him on the show instead of Ananya.”

However, no confirmation of Rashmika’s attendance has been received so far. “Hello, Koffee With Karan has been a part of my life, and yours, for 6 seasons now. I’d like to think we’ve made an impact and even found our place in pop culture history. And so, it is with a heavy heart that I announce that Koffee with Karan will not be returning (sic).”

Karan has previously said on his social media account, Karan subsequently stated that the programme will not be cancelled, and that it will now air on the OTT platform Disney+ Hotstar instead of on television.

Also Read: Karan Johar’s Koffee With Karan not going to end! Tap to read the truth

Malaika Arora admits to Arhaan that she is...

Suhana Khan does a handstand in yoga class...