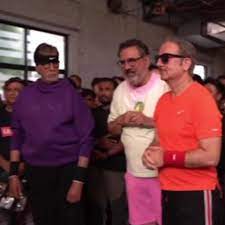 Uunchai, the next film by ace filmmaker Sooraj Barjatya, has completed its last schedule. Amitabh Bachchan, Parineeti Chopra, Anupam Kher, Boman Irani, Sarika, and Neena Gupta play pivotal parts in the film. As the film came to a close, actor Boman Irani turned to social media to share a photo of the last day, which he posted on his own Instagram account. Along with the video, he also wrote a nice letter.

On the last day of their work, the cast and crew can be seen standing together in the video. They performed Sooraj Barjatya’s famous leap as a homage to the director. Boman Irani stated, While uploading the video, “This little jump action we all did was Soorajji’s signature step when we did a good shot. We all did it for him as a tribute to his noble and humble royal direction during #Uunchai. This little skip is our little way of saying we love you…#uunchai.”

Fans rushed to leave nice comments as soon as the actor released the closing video. In the comments area, they also used heart emojis.

Earlier, Parineeti Chopra announced the movie on Instagram with such a photo of herself and Sooraj Barjatya among a beautiful scene of flora and mountains. Inside the caption, she writes, “Thrilled and honoured to be a part of the iconic cinematic universe of Sooraj Barjatya sir. Sooraj sir has defined, and is the torchbearer of India’s family entertainers and I can’t wait to work under his tutelage; alongside this stellar and incredible cast. Mr. Bachchan, happy birthday sir! This is a special day, and a special moment. @amitabhbachchan . Especially excited to be working once again with Anupam sir @anupampkher , Boman sir @boman_irani , and Neena mam @neena_gupta . And for the first time with Sarika ma’am and Danny sir.”

As he reveals PICS of his metamorphosis, Zayed Khan offers a credit to his’mentor’ Hrithik Roshan and Sussanne Khan

Tara Sutaria on sequels: I don’t worry about commerce or anything like that