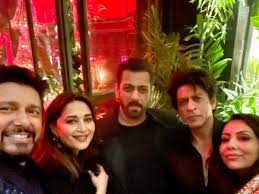 At Karan Johar’s birthday event, Shah Rukh Khan, Salman Khan, and Madhuri Dixit took a photo with Gauri Khan and Dr. Sriram Nene, bringing back all the memories. Karan’s 50th birthday party on May 25th appears to be a never-ending present! With so many Bollywood celebrities reunited under one roof for a good time, it was surely the party of the year, as seen by the numerous star-studded selfies on social media.

Just a few seconds ago, Madhuri Dixit came to her Instagram account and shared one of the night’s most epic photographs, which included SRK, Salman, Gauri, and Dr. Nene. Anyone else miss Hum Aapke Hain Kaun as much as we do?

The Dhak Dhak girl of Bollywood recently uploaded a precious snapshot with her husband Dr. Nene, Shah Rukh, Salman, and Gauri on the photo-and-video sharing site. Sriram Nene took a selfie of the five of them as they enthusiastically posed for a shot. Gauri donned a blingy golden outfit, and Madhuri wore a black blouse with sparkling pants, while the Karan Arjun actors were dressed in black.

Sharing the photo, Madhuri captioned the post, “So much to talk about, right?” and we can’t agree more. The three actors shared screen time in the film Hum Aapke Hain Sanam for the uninitiated. The moment she posted the photo, it sparked a social media frenzy, with followers deluging the post with likes and comments.

SRK, Salman, and Madhuri are all working on exciting projects. Shah Rukh Khan is preparing to return to the big screen after a four-year absence. He has Deepika Padukone and John Abraham in Siddharth Anand’s Pathaan. He’ll also appear alongside Nayanthara in Atlee’s upcoming film. Aside from that, Dunki will be the actor’s debut cooperation with Rajkumar Hirani.

Also Read: Darlings, starring Alia Bhatt and Shah Rukh Khan, will be released on THIS OTT platform, according to an official notification