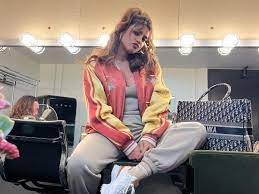 Priyanka Chopra is a global celebrity and her admirers like her social media postings. The actress frequently updates her Instagram account with details about her daily life and how she spends her time with her family and friends. In a recent Instagram post, the Dil Dhadakne Do actress posted a few photos of herself having a good time with her pals while attending Vir Das’ live gig in Los Angeles.

PeeCee uploaded a series of photos, the first of which shows her seated at a table. Shew is seen wearing beige track trousers with a matching ribbed shirt, which she wore over an orange and yellow bomber jacket. Priyanka Chopra finished off her ensemble with a pair of white shoes. We can see her chatting with Vir Das in the following photo, which is followed by a mirror selfie of her then a selfie of her with her group in the car. She also included a tiny live recording of Vir Das. The actress commented, I’m sharing these photos and videos because I love them. “What a day! With Awesome friends watching an awesome friend do what he does best! @virdas you r so brave and so inspiring to me! Not to mention had me in tears laughing!! Thx for having us! Also love having u in La @pearlthusi come back soon! @cavanaughjames r u finally moving too? Love u too @divya_jyoti.”

However, according to TMZ, Priyanka and Nick have given their daughter the name Malti Marie Chopra Jonas. In January of this year, the couple became parents through surrogacy. Priyanka and Nick did not announce the gender or name of their kid, but they did release a joint statement announcing the new addition to their family. In the statement, they also demanded privacy.

Also Read: Priyanka Chopra, a new mother, spends time at her LA home’s pool and wears a bikini in Instagram vs Reality

In photos, Katrina Kaif brightens as she enjoys her excellent hair on Saturday; Vicky Kaushal maintains things calm at the Mumbai airport

Shilpa Shetty looks stunning as she takes a bike ride on the sets of Sukhee, as seen in leaked photos