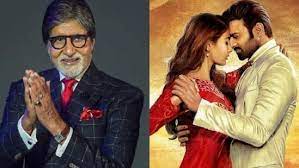 Radhe Shyam, starring Prabhas, is growing in popularity by the day. Following the positive response to the posters, teasers, and songs, the newest news is that Amitabh Bachchan has joined the cast as narrator.

The multilingual love storey, directed by Radha Krishna Kumar, is set in Europe in the 1970s, with Prabhas as a palmist. Radhe Shyam is a massive canvas that features state-of-the-art visual effects and features Prabhas and Pooja Hegde in never-before-seen avatars. It was shot extensively in Italy, Georgia, and Hyderabad.

Given the movie’s scope and importance, Amitabh Bachchan’s famous baritone and popularity provide the picture that much weight and complexity. Talking about this development, director Radha Krishna Kumar says, “The film is set in the 1970s and is mounted on a massive scale, we needed a voice that can command the nation and who better than Mr Amitabh Bachchan, a voice that everyone recognizes, respects and more importantly loved. We are so happy to have him as Radhe Shyam’s narrator .”

Radhe Shyam, a UV Creations production, is presented by Gulshan Kumar as well as T-Series. The movie, which is produced by Bhushan Kumar, Vamsi, as well as Pramod as well as helmed by Radha Krishna Kumar and edited by Kotagiri Venkateswara Rao, will be released on March 11th, 2022.