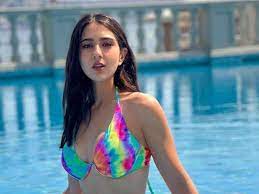 Sara Ali Khan is making the most of her stay in Istanbul, as seen by her frequent postings on social media.

Sara Ali Khan is an actress who is well-known for her social media presence. The actress, who had her big Bollywood debut with the 2018 film Kedarnath, has a large Instagram following and frequently keeps her fans interested with her lovely photos, whether they are from her family time, movie announcements, or on set fun. Sara is also an ardent traveller who enjoys seeing new destinations throughout the world.

In fact, she also posts beautiful photos from her travels, which are a pleasure for her followers.

Surprisingly, the Princess of Pataudi is now enjoying her stay in Istanbul and making the most of it. Sara is frequently spotted posting photos of herself visiting different parts of the beautiful city. She is now making news after sharing a breathtaking photo of herself in which she can be seen displaying her amazing bikini physique. The Simmba actress was seen in the picture wearing a multi-colored bikini and swimming in a pool. Sara was certainly raising the temperature with her bikini clad pic and Ananya Panday and Manish Malhotra were in awe of her beauty. The Pati Patni Aur Woh actress took to the comment section and wrote, “Bro what” along with heart in the eyes emoticons.

And in the meantime, Sara Ali Khan was most recently seen in Aanand L Rai’s directorial Atrangi Re, alongside Akshay Kumar and Dhanush. She is now collaborating with Vikrant Massey on Pawan Kripalani’s Gaslight. Vikrant’s first cooperation with Sara will be in this film, so he has nothing but respect for the Pataudi princess. In addition, she will appear in Laxman Utekar’s yet-to-be-titled film alongside Vicky Kaushal for the first time. Sara commented, “@vickykaushal09 every day with you on set has been a blast. From enjoying Punjabi songs and bonfires to early morning drives and copious cups of chai. Thank you for making this journey so memorable for me”.