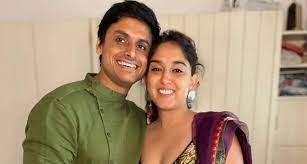 Ira Khan, Aamir Khan’s daughter, is frequently in the news for various reasons. She recently drew a lot of attention after she admitted to having anxiety episodes and weeping outbursts. When it comes to her personal life, she is always posting lovey-dovey photos with her boyfriend Nupur Shikare. These two are never shy about professing their affection for one another. Today, the star kid took to Instagram to share yet another set of adorable photos of herself and her boyfriend Nupur from their coffee date.

Ira Khan uploaded a photo of herself looking beautiful in her first Instagram story. It’s a selfie in which she’s wearing her hair to one side. She’s wearing a black top with a white shrug with blue stripes. She looked gorgeous with minimal makeup, just kohl on her eyes as well as hanging earrings. Nupur scribbled ‘Hey’ on the photo. Nupur is wearing a blue shirt and appears to be on his phone with a coffee mug in front of him in the following photo.

Ira, on the other hand, has always been open about her mental health issues and is frequently seen discussing them on social media. She sent a long message on Monday in which she discussed the one thing that alleviated her anxiety. She also said in the post that using body scrub while washing after her incident helped her relax.

On the job front, the starlet made her debut as a theatrical director a few years ago. She was the director of Euripides’ Medea, which starred Hazel Keech.

Also Read: Aamir Khan performs on the piano, eliciting excitement from followers as he pledges to reveal his mystery narrative on April 28

Karan Johar’s Koffee With Karan not going to end! Tap to read the truth