Bollywood Society » Aamir Khan performs on the piano, eliciting excitement from followers as he pledges to reveal his mystery narrative on April 28
Bollywood

Aamir Khan performs on the piano, eliciting excitement from followers as he pledges to reveal his mystery narrative on April 28 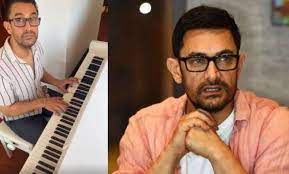 Aamir Khan is prepared to tell his narrative towards the world after just a series of videos in which he plays cricket and foosball. Aamir Khan said on Wednesday afternoon that his intriguing narrative would be revealed on April 28. A video of Aamir playing the piano was used to make the announcement.

Aamir says in the video, “I will share my story tomorrow (28 April) at 9’o clockw ith RJ Rishi Kapoor.” Aamir did not specify if the announcement will be made at 9 a.m. or 9 p.m. “Less than 24 hrs to go to know #KyaHaiKahani,” he tweeted beside the video. It goes without saying that Aamir’s fans were ecstatic and shocked.

Ajay Devgn discusses how celebrities are unable to voice their hearts; he says, “It is received quite differently”