In the city, Kriti Sanon oozes charm as she poses with director Hansal Mehta 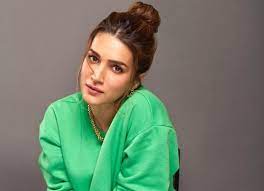 Kriti Sanon and her Luka Chuppi co-star Kartik Aaryan will next be seen in Shehzada.

Kriti Sanon is one of the most well-known actresses in Hindi cinema. Kriti has been in the spotlight since her debut in the 2014 film Heropanti, which she co-starred in with Tiger Shroff. The actress is demonstrating her acting chops and establishing her value with each performance. The actress has a busy schedule ahead of her, and we have exclusive information on a new movie she is working on.

At casting director Mukesh Chhabra’s office, Kriti Sanon was photographed with Hansal Mehta, the director of Scam 1992. The couple left the office late in the evening and were photographed by photographers. Hansal Mehta looked dapper in his printed white t-shirt, whereas Kriti Sanon looked stunning in her light blue salwar kameez. Kriti greeted the many fans who waited outside her workplace for a photo with her. After graciously posing in front of her admirers’ cameras, the star made her way to her car and drove away.

On the professional front, Kriti Sanon is working on a few fascinating projects. She is now working on Shehzada, directed by Rohit Dhawan, alongside her Luka Chuppi co-star Kartik Aaryan. She also has Ganapath, in which she reteams with her debut co-star Tiger Shroff, and Bhediya, in which she reunites with her Dilwale love interest, Varun Dhawan. Eight years after her acting debut, the Mimi actor has now become an entrepreneur. With Anushka Nandani, Karan Sawhney, and Robin Behl, she co-founded the business ‘The Tribe.’ Her business will provide virtual items such as seminars and diet regimens.

Also Read: As she goes in Ladakh, Kriti Sanon offers a tranquil reel: Taking in the splendour