Bollywood Society » As she goes in Ladakh, Kriti Sanon offers a tranquil reel: Taking in the splendour
Bollywood

As she goes in Ladakh, Kriti Sanon offers a tranquil reel: Taking in the splendour 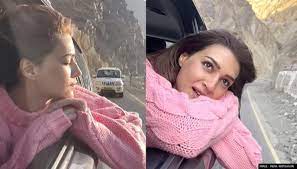 Kriti Sanon is adored by everybody. She is presently one of the most in-demand actors. Kriti is quickly becoming one of the most prominent actresses in the Hindi cinema business, and she has been in the spotlight since her debut in the 2014 film Heropanti, with Tiger Shroff. The Luka Chuppi actress is currently filming in Ladakh for her next film Ganapath. Kriti is also a social media powerhouse. She has a sizable fan base who eagerly awaits the release of her new photos on the internet. She showed us a stunning video of her Ladakh diaries and made us fall in love with the place.

Kriti Sanon could be seen inhaling and relishing in the ethereal beauty of Ladakh as she sat by the window seat of her car in the video she published on Instagram. In another video, she donned a lovely grey sweater. She looked stunning in her baby pink cardigan and radiated a genuine shine. Kriti was relishing in the type of radiance that only the mountains can provide. Kriti also included a beautiful caption with the movie. “Soaking in the splendour of Ladakh on my way to shoot every day! While i listen to the track I’m currently obsessed with!  #Pasoori”. she wrote.

The video quickly went viral, with people from all around the world showering her actress with love and admiration.

However, as previously reported, the actress Kriti Sanon is now filming Ganapath, an upcoming action thriller in which she could rejoin with Tiger. The release date is set for December 23, 2022. Kriti was recently seen in Bachchhan Paandey, an action comedy starring Akshay Kumar, Jacqueline Fernandez, and Arshad Warsi. Farhad Samji directed the film. Shehzada, the Hindi version of the Telugu classic Ala Vaikunthapurramuloo, will see her reconnect with Kartik Aaryan.

Also Read: Kriti Sanon, dressed in a white co-ord outfit, transforms the airport into a ramp

In fresh photographs, Aishwarya Rai Bachchan shows off her gorgeous makeup and hairstyle for Cannes 2022