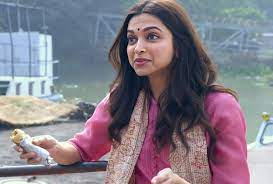 Deepika Padukone claimed that Piku has grown into the character she most closely identifies with at this point in her life.

One of the most prominent Indian actresses with a career lasting more than 15 years is Deepika Padukone. In her remarkable career, the actress has been in some of the most famous movies, including Om Shanti Om, Chennai Express, Ram Leela, Bajirao Mastani, and Padmaavat, as well as ground-breaking movies like Chhapaak, Finding Fanny, and Piku. In the meanwhile, the actress recently attended a function hosted by the World Gold Council in collaboration with The Gem & Jewellery Export Promotion Council. Along with her sister Anisha Padukone, the actress attended the celebration as the Chief Guest.

The 36-year-old actress claimed on the occasion that she is particularly fond of her title role in Shoojit Sircar’s Piku. In the 2015 slice-of-life drama, Deepika Padukone portrayed the strong-willed, ambitious lady Piku Banerjee against superstar Amitabh Bachchan, who played the part of her father, and the late Irrfan Khan. The Padmaavat actress claimed that she and her sister, a professional golfer as well, connect to Piku the most. “There was something very special about the energy in that film. I feel I and my sister (Anisha) are at an age where we are Piku. There is something about Piku that is very special. And that’s one of the movies that keep coming up in conversations. The stage of life that I am at now, that seems to be my most favourite (character),” Deepika Padukone said.

The actress Deepika Padukone said that everyone’s goal during the film’s production was to provide their best. “I was aware of the fact that I will be opposite these two incredible people but what makes for great collaboration is when you are not competing with your co-stars and you are really genuinely invested in telling a good story and that’s what we are there to do.”

In the next film Pathaan, directed by Sidharth Anand, Deepika Padukone will next be seen opposite Shah Rukh Khan and John Abraham. Her other upcoming projects include the remake of The Intern with Amitabh Bachchan, Sidharth Anand’s Fighter with Hrithik Roshan, and Anil Kapoor. Also Nag Ashwin’s Project K with Prabhas, and an enormously ambitious cross-cultural Hollywood production.

Also Read: Deepika Padukone attends an NRI gathering in the US while Ranveer Singh displays his proficiency in Konkani