Bollywood Society » ‘But your sunlight is in Mumbai,’ Arjun Kapoor explains, as Alia Bhatt looks for it in new London PICS
Bollywood

‘But your sunlight is in Mumbai,’ Arjun Kapoor explains, as Alia Bhatt looks for it in new London PICS 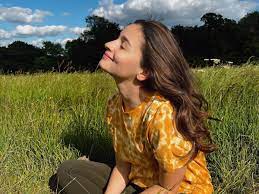 Alia Bhatt soaks up the sun in London while filming her Hollywood debut, Heart Of Stone.

Alia Bhatt is among Bollywood’s most popular actresses. The diva is now filming her Hollywood debut, Heart Of Stone, and has lately left for the set. In the film, she will appear with Gal Gaddot. Well, the actress has shared a couple of photos of herself looking very lovely, and we’re sure they’ll brighten up your Sunday. But it’s Arjun Kapoor’s remark on the Dear Zindagi actress’s photos that’s grabbing all the attention.

Alia Bhatt has shared a handful of photos of herself basking in the sun. Alia is wearing an olive pair of jeans with a yellow tie-dye top in the first photo. Alia is sitting on the grass, her head up to the sky and her eyes closed, taking in the sunshine. She may be seen lying down with her legs high in the air in the following photo. Her beaming smile is indication that she is having a great time. Alia added, “just give me my sunshine and I’ll be on my way.” The moment she posted these pics, Arjun Kapoor wrote, “Sunshine is in mumbai shooting with Luv ranjan but!!!”

On the job front, Alia Bhatt is presently filming ‘Heart Of Stone,’ her Hollywood first feature, which stars Gal Gadot and Jamie Dornan. Darlings, which she is co-producing with Shah Rukh Khan, will be her next film. She’ll also star with Priyanka Chopra and Katrina Kaif in Farhan Akhtar’s ‘Jee Le Zaraa,’ and Ranveer Singh in Karan Johar’s ‘Rocky Aur Rani Ki Prem Kahani.’

In the meantime, Alia and Ranbir will star in Ayan Mukerji’s highly awaited film ‘Brahmastra,’ which will be their first on-screen collaboration. Amitabh Bachchan and Mouni Roy both feature in the film. The film will be released in theatres on September 9, 2022.

Also Read: Neetu Kapoor reveals her surprise performance during Alia Bhatt’s Sangeet: I felt good knowing that I had made her happy

Kanika Kapoor admits that she was worried leading up to her wedding: The fact that I am a divorced mother of three