Bhumi Pednekar adds, “I absolutely want to do a full-fledged action movie” 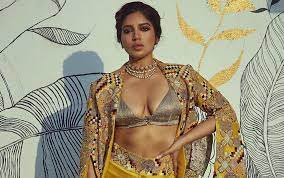 Bhumi Pednekar has established herself as one of her generation’s most versatile performers, and she now wants to branch out into the action genre! Anubhav Sinha’s Bheed, Ajay Bahl’s The Ladykiller, Shashank Khaitan’s Govinda Aala Re, Akshay Kumar’s Raksha Bandhan, Sudhir Mishra’s Afwaa, and Gauri Khan’s Bhakshak are among Bhumi’s upcoming films. She is really excited to add an action picture to this roster and show people that she is capable of performing fantastic stunts in major adrenaline-pumping flicks.

Bhumi Pednekar says, “I definitely want to do a full power action film. I have never done that. I want to see myself do that like some Matrix, some Lara Croft happening with Bhumi. It’s exciting for me and I definitely want to explore this in the near future. I feel I will have a lot of fun while doing this. So, I am actually searching for it and hopefully, I will find something.”

She adds, “The film world is my oyster and I feel there is so much more to explore. I feel so fortunate that I get such varied parts. 2022 is going to be a year full of characters which are on the opposite ends of the spectrum.”

Bhumi has already established herself as an exceptional performer, starring in films such as Dum Laga Ke Haisha, Toilet: Ek Prem Katha, Shubh Mangal Savdhaan, Bala, Lust Stories, and Badhaai Do (in which she played an openly homosexual girl), among others. If you ask Bhumi where she sees herself in 20 years, she responds, “I honestly don’t have an answer to it. I mean I definitely would be a climate activist. I definitely see myself acting. But is this the only thing I would be doing? Definitely not!”

Also Read: Bhumi Pednekar on portraying small-town girls in movies: “I’d want to be a part of tales that represent them”