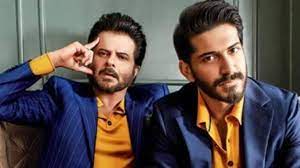 Harsh Vardhan Kapoor, the son of Bollywood star Anil Kapoor, turned 31 today. Wishes for the actor’s son have indeed been coming in from all over the world. Several of his friends and family members, especially his sister Sonam Kapoor, mother Sunita Kapoor, and many others, flocked to social networks to express their love for the actor through sharing his adorable photos. Too, his father, Anil Kapoor, congratulated him too though, however in a unique manner. Together with the article, he also included photos.

According to Anil Kapoor, “Thanks bro, for always keeping me on my toes and for the shoes to go with it !! Happy Birthday, @harshvarrdhankapoor!!”

The photographs appear to be from a photoshoot, as well as the father Anil Kapoor and son look stylish in photos. Harsh Vardhan Kapoor started his career in Bollywood as an assistant director on Anurag Kashyap’s movie Bombay Velvet, released in 2015. Later, he screen debut inside the movie Mirzya and since then has appeared in films including Bhavesh Joshi Superhero and AK versus AK, and also the Netflix series Ray.

Sunita Kapoor daughter of Anil Kapoor, the actress’s mother, also commented on the post. “Please Wish him a huge hug from me,” Neetu Kapoor tweeted with heart emojis.

Sonam also uploaded a childhood photo and expressed her desire, “Brother, I adore you. The cutest little brother has grown into a fantastic young man. I sincerely hope and pray that you realise your full potential and realise your aspirations. On your birthday, though, I mostly wish you health and pleasure.”

Also Read; Badal: All you should know about this Bollywood’s action movie