Bollywood Society » Netflix series based on actual events, will be directed by Hansal Mehta
Netflix

Netflix series based on actual events, will be directed by Hansal Mehta 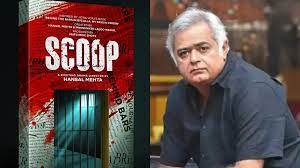 Hansal Mehta will make his directorial debut on Netflix with the series Scoop, kicking off a relationship with the streaming service. Matchbox Shots, the production company behind the character drama, just began filming. Scoop is indeed a character drama based on Jigna Vora’s book ‘Behind The Bars In Byculla: My Days in Prison.’ It follows Jagruti Pathak, an ambitious crime journalist, on her journey. When she is accused well with the horrible murder of a fellow journalist, Jaideb Sen, and herself up in a jail cell among individuals she formerly reported about, her world comes crumbling down.

A famed sniper, a shady bookie, as well as the infamous Chhota Rajan are among those indicted. While she awaits a trial, the truth is discreetly buried.

“Reading Jigna Vora’s book ‘Behind The Bars in Byculla: My Days in Prison’ caught my attention and motivated me to bring this narrative life on screen,” Hansal Mehta stated of the series as well as his association with Netflix. We’ve already started filming, and Now I’m looking forward to working with Netflix on this project. Great stories can only benefit from a service that can help them reach a broader audience; Scoop is one of those tales, and with Netflix, we’ll be able to bring it to a global audience. I’m hoping to go deep into a storey about our mediatized times and the human cost of tales that we consume on a regular basis with my co-creator Mrunmayee Lagoo and producers Matchbox Shots.”

Sharing his thoughts on Scoop, the producer at Matchbox Shots, Sanjay Routray said, “When we first laid our hands on Jigna Vora’s book ‘Behind the Bars in Byculla’, we were astounded and instantly knew that this inspirational story of grit and courage needs to be told on a wider medium. Netflix was the obvious choice for us because filming it as a series gives us the opportunity to nuance the characters and their emotions further. For a tale with such a gut-wrenching narrative, only a mastermind like Hansal Mehta would be able to do complete justice. He’s a natural when it comes to bringing such hard-hitting, real-life stories to life. Honestly, our collaboration with Hansal and Netflix just aligned seamlessly, and it’s the perfect combination for stellar storytelling.”

Jhund, starring Amitabh Bachchan, to be released in theatres on March 4