Bollywood Society » All of Us Are Dread, a fifth most popular show on Netflix
Netflix

All of Us Are Dread, a fifth most popular show on Netflix 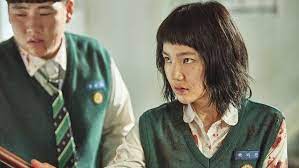 All of Us Are Dead, a South Korean zombie apocalypse drama, remained at the top of Netflix’s weekly viewership ranking for the second week in a row, and it currently ranks as the sixth most popular non-English-language series on the platform.

According to Variety, the current zombie thriller began in the fifth position with 361 million hours on Netflix’s all-time rankings, which measure the streaming service’s Top 10 most successful non-English TV series based on hours seen in their first 28 days on Netflix. Its arrival knocks ‘The Queen of Flow,’ which was previously ranked 10th, off the list.

Money Heist parts 4, 3, and 5 stay in positions 2, 3, and 4, respectively, while the South Korean mega-hit survival thriller Squid Game remains at the top of the rankings with 1.65 billion hours seen in its first 28 days after release. All of Us Are Dead is currently in fifth place, followed by Café con Aroma de Mujer at No. 6, Lupin Part 1 at No. 7, Elite Season 3 at No. 8, Who Killed Sara? at No. 9, and Elite Season 4 at No. 10.

All of Us Are Dead, which premiered on January 28, follows a group of high school kids who are stuck within their school campus due to a zombie epidemic. The pupils must battle their way out or risk becoming infected with rabies. The series is based on Joo Dong Geun’s webtoon “Now at Our School,” which was released between 2009 as well as 2011.

Also Read: Park Ji Hu stars in the Korean zombie drama All Of Us Are Dead

Zendaya defends Euphoria in face of criticism from educational institutions

Chuu from K-pop group LOONA, will not perform in future