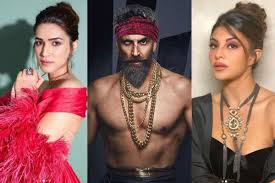 Bachchhan Paandey, starring Akshay Kumar, is one of the most anticipated films of the year. The Farhad Samji directed film, which also stars Kriti Sanon, Jacqueline Fernandez, and Arshad Warsi, has been generating a lot of interest since the makers released the trailer for Bachchhan Pandey. And now, the action comedy is making news once more, as the makers have released the first track from the film, named Maar Khaeygaa, in which Akshay Kumar shows off Bachchhan Paandey’s tashan.

The two-minute-and-36-second music was featured on Akshay Kumar, who was shown channelling his inner godfather. In the song, the Kesari actor flaunted his nasty swag and appeared to be menacing and invincible, as the music shows Bachchhan Paandey’s tough persona. It’s a unique, off-beat track that will quickly capture your attention. Maar Khayegaa was composed by Vikram Montrose and sung by Farhad Bhiwandiwala and Vikram Montrose. It is said to be an evil song.

also read: Who was the top Bollywood singer/actress of the old times?