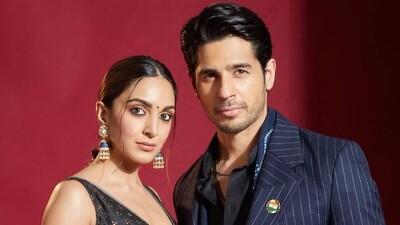 In addition to being one of the cutest on-screen couples, Kiara Advani and Sidharth Malhotra are also loved off-screen. The Shershaah couple is said to be dating in real life, and whenever they are seen together, their fans cannot help but swoon. Kiara and Sidharth recently conducted an Instagram live session for their followers to celebrate Shershaah’s first anniversary. The two recalled amusing incidents from the filming of their movie, while Sidharth recalled a lengthy trip from Chandigarh to Palampur.

During the Instagram live session with Kiara, Sidharth recounted how it took a while to go from Chandigarh to a monastery close to Palampur for the Shershaah filming. In the video, Kiara can be seen making fun of Sidharth over it. Sidharth continued, though, by saying that as long as Kiara was with him, the lengthy voyage didn’t bother him. When Kiara hears this, she is heard flushing and says, “Arre Arre Arre None of these feelings came out there. You were doing your own thing in the car. I was doing my own thing.” Sidharth replied, “I was feeling it from inside please.”

Not only this but during the Instagram live session, Kiara and Sidharth also reminisced about the days of the shoot and shared how eager they used to be to prepare for the following day of shooting after packing up. Initially, Kiara and Sidharth started their lives separately, but in the end, the two sat down together after fans asked them to do so.

On the first anniversary of the film Shershaah, the rumored couple surprised fans by releasing a sweet reel in which they imitated a scene from the film. Additionally, Kiara and Sidharth teased doing another movie together, which interested fans.

Sidharth and Rohit Shetty were filming for Indian Police Force at the same time. Together with Shilpa Shetty and Vivek Oberoi, Sidharth makes his digital debut in the web series. In addition to this, he also has Yodha, Thank God, and Mission Majnu. Kiara, on the other hand, is in the middle of filming her Ram Charan movie. She also stars with Vicky Kaushal and Bhumi Pednekar in Govinda Naam Mera.

Also Read: Sidharth Malhotra shares a BTS photo from the sets of his film for the Indian Police Force