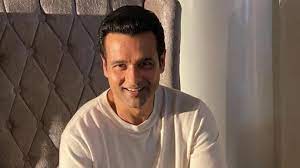 Rohit Roy, who has appeared in films like as ‘Swabhimaan,’ ‘Dus Kahaniyaan,’ ‘Kaabil,’ and ‘Mumbai Saga,’ is ready to make his foreign debut with Sam Bhattacharjee’s cyber thriller movie ‘IRaH.’

Inside the movie, his character is a deceitful, narcissistic CEO of a tech business who develops an AI-based programme called IRaH 5.10, which allows a person to achieve immortality by preserving himself.

When it comes to the uniqueness of the concept, Rohit informs IANS, “Honestly, the idea of the film itself is the hero. I’d say that’s the main hero of the film and it’s a very intricately woven script so there’s not much I can reveal at this point. Every scene opens a new door into the psyche of the main characters and the novelty of the idea was what in the first place attracted me to the film.”

WIth a concept as tout as this one and the resultant performance, the actor considers it one of his best works on celluloid, “I think this is probably one of my best works on cinema and I say this with all the critique that I can give myself. I think the whole credit for my work will go to the script and to the novelty of the idea.”

The narrative, according to filmmaker Sam Bhattacharjee, is a dramatic example of what may happen in the near future as humans become more reliant on the virtual world. “The world has gone digital,” he continues, “and there are new forms of crimes that have a direct impact on our lives.” To be honest, we now engage with screens more than we do with people in person. ‘IRaH’ is a film that portrays the tale of today’s world. It’s a suspenseful thriller that raises many concerns and promotes awareness of our near future.

Rohit calls the film a huge responsibility as it’s his first international project, “To play the central character in a film like ‘IRaH’ means a lot to me. It’s a lot of responsibility on my shoulders and to carry a film like this, which is so intricately woven, becomes very difficult to keep track of. Of course there were improvisations on the set and the credit for that goes to the director. He was very open to all sorts of suggestions, in fact the end which according to me is the most important part of the film.”

He also reveals the extent of improvisations on the sets, “The director actually came up with the end while we were shooting so that rarely happens in a locked watertight script like ‘IRaH’, but the idea was so good that all of us agreed immediately saying that should be the end of the film, earlier it was ending very differently.”

“I will not say much about it, but the experience was absolutely awesome and also shooting in London has its own charm. The locations were fantastic, the crew was excellent so everything was an added plus. It was great working on the film”, Rohit adds.

Tara Sutaria on her Hollywood ambitions: I’d want to approach as soon as possible; I don’t want to regret it later.