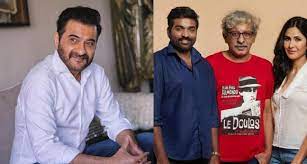 Sanjay Kapoor is the newest addition to Sriram Raghavan’s Merry Christmas ensemble, as announced exclusively by Bollywood Society last week. The film, which stars Katrina Kaif and Vijay Sethupathi, is now under production. According to a source, the thriller was shot all around the city and will shortly be moved to Pune.

Reacting to the announcement, an ecstatic Sanjay Kapoor said, “I am looking forward to working under Sriram Raghavan’s vision. He is one of the best filmmakers of Hindi cinema today.”

A source had exclusively told Bollywood Society, “Sanjay plays an extremely important role in the film, however, his character details have been kept under the wraps, though his part will have multiple layers. He will start shooting for the film this month. Katrina and Vijay are filming in Mumbai, and will move to Pune soon for another schedule.”

Sanjay Kapoor remarked that Raghavan’s cinematic approach has awed him. Merry Christmas was launched in December 2021 by the director who gave us the 2018 smash Andhadhun.

Starred in The Fame Game, added, “I have been in awe of his style of storytelling ever since I saw Badlapur. After I watched Andhadhun, I was certain that I would like to work with him someday. He knows the art of making something so normal seem extraordinary on-screen.”

Also Read: Shanaya shares post in crop-top, Even father Sanjay Kapoor is jealous of her abs