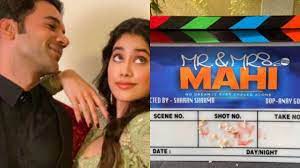 Roohi, Rajkummar Rao, as well as Janhvi Kapoor are going to reunite with Mr & Mrs Mahi, which will be directed by Sharan Sharma and produced by Karan Johar. The movie is slated inside the world of cricket, and indeed the Kai Po Che actor will play Mahendra, whereas Janhvi will play Mahima. Producer Karan Johar revealed the project on his social media in November 2021.

Well with a photo of the clapboard on social media today, Johar’s Dharma Productions revealed that now the filming of Mr And Mrs Mahi’s has finally begun, and wrote: “The field is set and team #MrAndMrsMahi is all geared up! Day 1 of the shoot begins!” Karan also shared the photo on his Instagram stories, wishing luck to the cast of Mr and Mrs Mahi. The Kuch Kuch Hota Hai filmmaker wrote, “Best of luck to the entire team of #MrAndMrsMahi for starting the first innings! Knock it out of the park.”

Janhvi will next be featured in Sidharth Sengupta’s film Good Luck Jerry, in addition to Mr and Mrs Mahi. Mili, a remake of the Malayalam film Helen, is also produced by her father Boney Kapoor and stars Sunny Kaushal. She will then star with Varun Dhawan in Bawaal, which is presently under production.

Rajkummar, on the other hand, will next appear in the Hindi version of the 2020 Telugu thriller HIT: The First Case, Bheed, alongside Bhumi Pednekar, and the Netflix drama Monica, O My Darling, alongside Huma Qureshi, Radhika Apte, and Radhika Madan.

Cirkus: Rohit Shetty reveals the poster for his upcoming movie with Ranveer Singh

Arjun Kapoor gives us a sneak peek at his 15-month fitness transformation: It’s been a difficult year