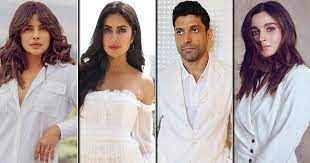 Girl-bonding Farhan Akhtar road movie Jee Le Zaraa appears to have encountered a snag. To go along with the three female celebrities Priyanka Chopra Jonas, Katrina Kaif, and Alia Bhatt, it requires three A-listers as heroes. The heroes, on the other hand, show no signs of being chivalrous.

According to a source close to filmmaker Farhan Akhtar,  “It is tough casting the male leads when the female leads are already in place. All the top actors assume the women have meaty roles while the men are mere shadows. Lekin aisa nahin hai. The men in Jee Le Zaraa have very important roles to play. Lekin abb inko kaun samjhaye (who is going to explain to them?).”

Farhan is reportedly looking for three male superstars to couple with his super-ladies. He could wind up playing one of several leads to set a good example for other top-tier leading males who are hesitant to be seen with forceful women.

The movie is produced by Farhan as well as Ritesh Sidhwani’s Excel Entertainment and Tiger Baby, which is helmed by Zoya Akhtar as well as Reema Kagti and is billed as just a road trip drama.

Upon that 20th anniversary of his directorial debut, “Dil Chahta Hai,” the 47-year-old filmmaker stated he is looking forward to working on the project.

“Did someone say road trip?” says the narrator. I’m ecstatic to announce my next project as a filmmaker, and also what better day to be doing it than the 20th anniversary of ‘Dil Chahta Hai.’ @priyankachopra’s #JeeLeZaraa @aliaa08 #KatrinaKaif “I cannot wait to get this show on the road,” Farhan remarked, referring to his comeback to directing after the release of his Shah Rukh Khan-starrer “Don 2” more than a decade ago.

Farhan and Zoya have helmed popular road trip films in the past, including “Dil Chahta Hai” (2001) and “Zindagi Na Milegi Dobara” (2011).

In India, Spider-Man: No Way Home will be released a day early on Dec 16

Who is Richard Gere?