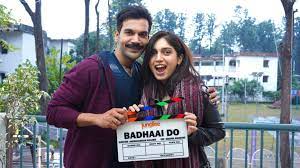 Cinemas around the country have been forced to close due to a recent outbreak of the omicron form of coronavirus. As the theatres closed, major studios postponed their releases. However, as time has passed, the situation has improved significantly across the country, as well as theatres are slowly reopening. The creators of Rajkummar Rao and Bhumi Pednekar’s Badhaai Do announced on Monday morning that the trailer for the film would be released on January 25.

Everyone around the movie production and distribution medium was held in suspense by the producers. It has now been revealed that Harshavardhan Kulkarni’s social comedy would be released over the Valentine’s Day weekend in 2022. As per a tabloid article, the producers are committed to delivering this picture to the big screen. The movie has undergone multiple test screenings and also has gotten positive feedback from target audiences.

Cinema halls are currently open in Maharashtra, although they are currently closed in Delhi. Starting in early February, it is expected that Delhi movie halls would reopen with such a 50% occupancy restriction. If February 11 is not available, Badhaai Do will be released on February 18. For the time being, that is the plan.

When is the release date of the show tiktokers on Netflix?