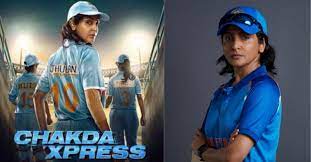 The first schedule of the sports drama starring Anushka Sharma, who had started filming for Chakda Xpress in June, has been completed.

Anushka Sharma hasn’t been on television or a movie screen in around four years. The actress most recently appeared alongside Shah Rukh Khan and Katrina Kaif in Aanand L Rai’s 2018 film Zero. Anushka Sharma will return to acting with Chakda Xpress after taking a hiatus following the failure of Zero. Anushka will play Jhulan Goswami in the biopic, which is on the cricket player. In fact, Anushka’s recent rigorous training sessions led to the movie just hitting theatres.

Anushka Sharma has finally completed the first schedule of Chakda Xpress, according to a new update. The actress from Ae Dil Hai Mushkil posted the information on social media, announcing the schedule wrap in traditional cricket fashion. Anushka posted a photo of herself clutching a cricket ball with the words, “Holding a cricket ball in my hand,” scribbled on it.  “It’s a schedule wrap”. Anushka captioned the post as, “SCHEDULE ONE DONE. More to follow.. #ChakdaXpress”.

It should be noted that Anushka will be portraying a cricket player for the first time in this movie. Anushka spoke to Mid Day about the film,  “It is a fact that women have to go that extra mile to earn their place in this patriarchal world. Jhulan Goswami’s life is testimony to the fact that she carved her own destiny, and fought for every inch of the spotlight and recognition. I hope that I can do justice to the script”. Chakda Xpress is expected to premiere on Netflix next year.

Also Read: In an orange swimsuit, Anushka Sharma is a sight to behold as she shoots her own photos in the Maldives

Shahid Kapoor posts a cute photo of Misha and Zain: The child within of us is still alive; feed it properly