Bollywood Society » Aziz Ansari to make his directorial debut, based on an Atul Gawande novel
Hollywood 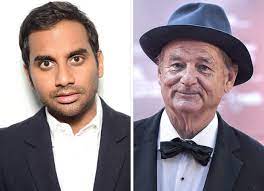 Aziz Ansari, a Hollywood actor, will allegedly feature with Bill Murray in an unnamed dramedy, which will also be his directorial debut. The feature film is set at Searchlight Pictures and is based on a non-fiction book by Atul Gawande.

According to The Hollywood Reporter, Aziz Ansari, who co-created the Netflix comedy-drama series Master of None, is working on the project quadruple duty. In addition to directing, the actor developed the screenplay, will produce, and appear in the picture with Oscar contender Bill Murray.

The forthcoming film is based on surgeon Atul Gawande’s nonfiction book Being Mortal: Medicine and What Matters in the End, which was a No. 1 New York Times bestseller in 2014. It is a “moving and clear-eyed look at ageing and mortality in our culture, and also at the abuses we do in making this into a medical problem, rather of a human one,” according to the New York Times Review of Books. It was termed a “masterful investigation of ageing, mortality, as well as the medical profession’s mismanagement of both” by the Boston Globe.

The plot of the film, as well as the roles that Ansari and Murray will portray, have yet to be revealed. Youree Henley will also co-produce with Ansari, with Searchlight’s Taylor Friedman and Cameron Chidsey in charge of the project.

“Aziz Ansari is an incredible talent and, with this script, he brings a singular combination of insightful humour and pathos,” said Searchlight presidents David Greenbaum and Matthew Greenfield in a statement, according to THR. “We’re thrilled to be partnering with him on his feature directorial debut, which is long overdue, and, of course, working with the genius Bill Murray once again.”

Aziz Ansari is best recognised for his role on NBC’s Parks and Recreation as the brash entrepreneur Tom Haverford. For the successful Netflix series Master of None, which he also performed in and executive produced, he won two Emmy Awards for best writing for a comedy. He just directed his Netflix comedy special Aziz Ansari: Nightclub Comedian.

The feature film will be released in theatres in 2023.

In Apple TV+, Emmy Rossum has been cast as Tom Holland’s mother.