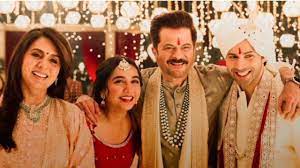 When Kiara Advani was questioned about marriage, Karan Johar, the producer, Jug Jugg Jeeyo swiftly joined in with his funny view on marriage.

When Jug Jugg Jeeyo, Kiara Advani, Varun Dhawan, Neetu Kapoor, and Anil Kapoor gathered for the major trailer premiere event in the city on Sunday, they were at their wittiest best. After displaying the film’s teaser, the actors danced to the sounds of dhol and chatted with the media, dressed in their ethnic finest.

Because the film is about marriage and divorce, the performers had to deal with inquiries about marriage from the press. One of these journalists grabbed the chance to question Kiara Advani about her intention to settle down and marry. The actress is rumoured to be dating Sidharth Malhotra, for those who are unaware. They haven’t made it official yet, though.

The journalist answered by calling Karan “multi-talented,” to which the producer responded with another amusing remark, “Shaadi koi talent nahi majboori hoti hai (Getting married doesn’t require talent it’s a compulsion).” The exchange of words left everyone in splits.

Also Read: Here’s why Kiara Advani signed the film and Varun Dhawan is looking forward to its release

During dancing practises, Suhana Khan, Agastya Nanda, Khushi Kapoor, and others are a happy bunch