Bollywood Society » Sussanne Khan and Arslan Goni, the rumoured couple, are photographed at the airport in casual dress
Gossip

Sussanne Khan and Arslan Goni, the rumoured couple, are photographed at the airport in casual dress 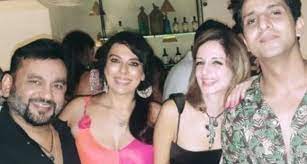 Sussanne Khan and Arslan Goni, who are rumoured to be dating, were photographed together at the airport a few hours ago. Sussanne is rumoured to be dating actor Arslan Goni, according to reports. They have not, however, acknowledged or rejected these rumours. They are quite active on social media, and they frequently remark on each other’s postings. Furthermore, their photographs, appearances at parties, and excursions together add fuel to the flames. Speaking of which, they were photographed at the airport when they arrived in the city a while back. Hrithik Roshan and his girlfriend Saba Azad, Sussanne’s ex-husband, were also photographed at the airport today.

Sussanne and Arslan maintained their nighttime airport attire comfortable, informal, and stylish. Sussanne was dressed completely in black, with a black round-neck top and a pair of biker shorts. She had a light-colored scarf over her neck as well. Sussanne had her short hair down and wore very little makeup. A pair of white sneakers and a large sling purse completed the interior designer’s ensemble. Arslan Goni, on the other hand, was seen sporting a bright-yellow top that he paired with a pair of light blue denim slacks. He was also wearing a hat. They continued strolling while the shutterbugs snapped photos from afar.

Sussanne and Arslan were in Turkey last month, where the former was filming a production called Love Ek Tarfaa. The project’s specifics have been kept under wraps. Both of them used their social media accounts to publish images from their vacation.