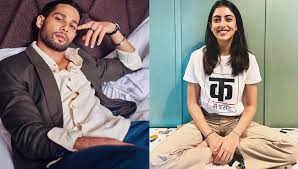 Siddhant Chaturvedi is without a doubt one of Bollywood’s most promising actors in recent years. With his depiction as MC Sher in Zoya Akhtar’s Gully Boy, the young youngster left a lasting impact. He has been in the spotlight since then, and he has amassed a large following. Siddhant not only entertains people on the big screen, but he also keeps them involved on social media. Siddhant is a frequent Instagram user who frequently shares his photos and musings with his followers. Last night, one of these photos not only drew the attention of admirers, but also elicited a response from his rumoured ladylove Navya Naveli Nanda.

Siddhant posted to Instagram a few hours ago and uploaded a very lovely photograph. In a red shirt and light-blue denim jeans, the actor looked dazzling. He also sported a stylish pair of shoes. He also sported a pair of stylish sunglasses. While posing for the photo, the actor sat in a field outside. Siddhant captioned the photo when he shared it on social media:

Sara Ali Khan poses in front of a mosque in Turkey, rocking a vibrant pink ensemble

When Katrina Kaif was asked about her nervousness, she said: You don’t have to break down under duress