Sara Ali Khan poses in front of a mosque in Turkey, rocking a vibrant pink ensemble 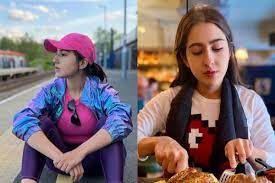 Sara Ali Khan is among the industry’s most promising actresses. In films like Kedarnath, Love Aaj Kal, Atrangi Re, and Simmba, she has proven her acting chops. In addition, she is a travel fanatic who enjoys documenting her adventures on Instagram. She frequently posts photographs and videos of areas she has visited. The actress has a large social media following and so shares peeks of her holiday photos with her fans and admirers, which inevitably inspire huge trip dreams.

Sara Ali Khan is now spending her summer in Istanbul, Turkey, with her pals Tanya Gharvi, Parth Mangla, and Rohan Shrestha, and she has made it a point to document her trip for her fans.

Süleymaniye Camii, Hagia Sophia Grand Mosque, and Ayasofya Cami were among the sights the actress visited in Istanbul. In her pink dress, she stood in front of Ayasofya Cami. She also retweeted Rohan Shrestha’s article, in which she is seen standing in front of her teacup in her own funny way. Sara appears to be having a great time with her pals while enjoying the picturesque vistas of Istanbul, Turkey, as seen by the photos she has posted.

Apart from Istanbul, she visited Pahalgam in the summer of 2022, where she enjoyed a journey through the gorgeous valleys of Kashmir, and London, where she adorned the city’s streets with her neon flair. In one of her images, the Atrangi Re actress can also be seen enjoying her British breakfast.

Sara Ali Khan is currently working on a film with Vikrant Massey called Gaslight, as well as an unnamed feature starring Vicky Kaushal.

Babil Khan, Irrfan Khan’s son, posts a photo in memory of his father and claims to have learned a lot unconsciously