Bollywood Society » People made my ‘bigger than normal’ physique their business,’ Nimrat Kaur said of her physical metamorphosis for Dasvi
Gossip 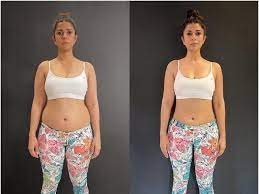 Nimrat Kaur’s performance inside the Abhishek Bachchan and Yami Gautam movie Dasvi has been making ripples in the industry these days. The actress was seen in the film as Abhishek Bachchan’s wife, Bimla Devi Chaudhary, and received a lot of praise for her performance. Nimrat Kaur is currently making news after sharing photos of her metamorphosis and discussing her weight gain with Dasvi. Nimrat had gained 15 kgs for the role in the film, for those who are unaware.

Nimrat Kaur sent a meaningful remark on her weight gain experience by sharing a collage of her weight loss. She penned, “Born with what’s typically categorised a small to medium body type, with Dasvi came the requirement for me to size ‘up’. The idea being similar to be as unrecognisable and physically as dissimilar from ‘being Nimrat’ as possible. There was no target number in mind, but by the end of trying to achieve the desired visual impact, I was a touch above 15 kilos from my usual weight”.

Nimrat Kaur went on to say that while she was apprehensive about gaining weight, she was looking forward to become Bimla later.

Nimrat Kaur also discussed the teasing she received after gaining weight, which included a nasty comment, an unwelcome joke, or unwanted advice on what she should eat. Nimrat claimed that this path has taught her how to not let an outside opinion determine her connection with herself now that she is back to being physically herself. “Be kind. Be sensitive. Be graceful. Don’t make someone’s day worse if you can’t make it better. Be responsible. Make only your mind and body your business. No one else’s,” she concluded.

Celebrities like Parineeti Chopra, Vaani Kapoor, Athiya Shetty, Sophie Choudhry, and others praised Nimrat as soon as she published the post.

Ranveer Singh on the reception to the trailer for Jayeshbhai Jordaar: “I am extremely overjoyed with the reactions to it.”