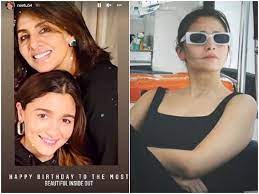 Alia Bhatt’s path has been nothing short of an inspiration, proving her mettle as one of Bollywood’s most promising young talents. The amazing diva from ‘Kapoors & Sons’ has become a year older, and well wishes have begun to flood in for her. Neetu Kapoor, actor Ranbir Kapoor’s mother, turned to social media just as the clock struck 12 to wish Alia Bhatt a happy birthday. On her Instagram stories, the veteran actor shared a throwback photo with Alia and a sweet message for her. “Happy Birthday to the most beautiful inside out,” wrote the ‘Jug Jugg Jeeyo’ actress.

Alia Bhatt gets along swimmingly with Ranbir Kapoor’s mother, Neetu Kapoor, and other members of his family. She is frequently seen at family get-togethers. In fact, when Ranbir remained in-home quarantine owing to COVID-19, Neetu Kapoor attended the celebrations with her family on the ‘Highway’ actress’ birthday last year. Fans couldn’t stop raving over photos of Neetu showering Alia with love when they arrived.

Alia Bhatt is now on vacation with her sister Shaheen Bhatt to celebrate her 29th birthday. On social media, the Bhatt sisters have been giving followers peeks of their holiday. On March 14, Alia uploaded a photo of her morning view, which showed her sister Shaheen relaxing in the pool as the Raazi star sipped her coffee. It’s still unknown if Alia’s boyfriend Ranbir Kapoor would travel out to celebrate her birthday with her.

Meanwhile, Alia is preparing for the release of SS Rajamouli’s RRR alongside Ram Charan, Jr NTR, following the success of Gangubai Kathiawadi. She’ll also be seen with lover Ranbir Kapoor in Ayan Mukerji’s much-discussed Brahmastra. Not only that, but Alia Bhatt will make her English-language debut starring Gal Gadot and Jamie Dornan in the spy thriller ‘Heart of Stone.’

Also Read: The theme of birthday of Alia Bhatt vacation with Shaheen Bhatt is ‘happy’ faces