Neetu Kapoor claims she completed Rishi Kapoor’s films as a ‘favour’: I resembled a chamchi 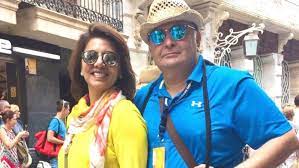 Neetu Kapoor is ready to return to Bollywood after seven years with Raj Mehta’s comedy-drama Jug Jugg Jeeyo, which also stars Varun Dhawan, Kiara Advani, and Anil Kapoor, as well as Prajakta Koli and Manish Paul in prominent roles. In a recent interview, the actress stated that she worked on films with her late husband, actor Rishi Kapoor, as a “favour.” To be sure, the two have collaborated on films like Kabhi Kabhie, Khel Khel Mein, Zinda Dil, Amar Akbar and Anthony, Beshram, Love Aaj Kal, Do Dooni Chaar, and many more.

In an interview with PTI, the actress described herself as a ‘chamchi’ to her late husband and claimed she worked with Rishi to make him happy. Says Neetu, “There were films that I did with my husband and I was like a chamchi (sycophant), he would say come and do it. I did not do it off my own will. Jug Jugg Jeeyo is my will. I was doing (all that) trying to make my husband happy. Like, one shot in Love Aaj Kal, then with Do Dooni Chaar some actress didn’t want to be a mother of two older children, I don’t have those hang-ups. They requested and I did it. So, I was doing him a favour, not that I wanted to do.”

Neetu Kapoor also discussed how she handled Rishi Kapoor’s passing, describing it as a journey for her. “My kids told me don’t sit at home, get busy. I don’t want to sit and think, and be sad. Earlier, it was all about my husband and kids.” Neetu went on to say that she is now welcoming work into her life. Jug Jug Jeeyo, on the other hand, will be published on June 24, 2022.