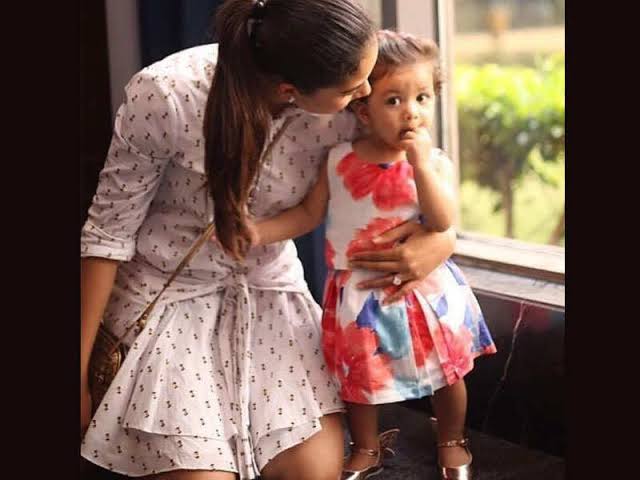 The wedding season is upon us in India, and not only the common people, but even the celebrities, have been taking advantage of it. While tinselville has seen a slew of celebrity weddings this year, Sanah Kapur, Shahid Kapoor’s half-sister, will marry lover Mayank Pahwa in Mahabaleshwar. The wedding festivities have begun, with the soon-to-be-married couple’s mehendi and haldi ceremonies taking place on Tuesday. Mira Rajput, who is very active on social media, has been posting beautiful photos from the celebrations to keep her admirers interested.

Mira Rajput has released yet another stunning photo, this time featuring her daughter Misha Kapoor as the subject. In the photo, the tiny munchkin wore a yellow and white suit with a pink flower print, which she looked wonderful in. Her ensemble was finished by a matching yellow dupatta with a pink border. Her pink parandi with a lovely heart on it, on the other hand, stole the show and gave off the right Punjabi kudi feel. “Parandis and Mish Mish,” Mira captioned the photo.

Meanwhile, many videos from Sanah Kapur’s pre-wedding rituals have gone viral, showing the bride-to-be loving every moment of the festivities. Sanah looked stunning at the celebrations, wearing a magenta-colored suit with a mustard crop shrug.

Her cousin Vivaan Shah also shared a video from the celebration and wrote, “Congratulationssss @sanahkapur15 @mayankpahwa_13 love you’ll. Baa would have been soooop= proud Sanuuu”.