In the Hindi remake of Soorarai Pottru, would Akshay Kumar romance Radhika Madan? 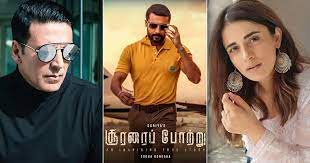 For a long time, Bollywood has been seeing the practice of replicating South hits. We have various South movies that have been recreated in Bollywood and have been huge hits here, ranging from Singham to Kabir Singh. Surprisingly, a new movie is about to join the fray. We’re talking about Suriya’s next film Soorarai Pottru, which also stars Aparna Balamurali. According to rumours in the media, Akshay Kumar would star in the Hindi remake, which will be directed by Sudha Kongara, who previously directed Soorarai Pottru.

While fans wait for a formal announcement, Radhika Madan has been cast as the female lead in the Soorarai Pottru adaptation, according to a recent update. She’ll apparently be filling in for Aparna Balamuralia in the film. When it comes to it, a source informed Mid Day, “The film is in the pre-production stage, with the director having reportedly set the adaptation in western India. In all likelihood, Radhika will play a woman from rural Maharashtra. She will have to learn a specific dialect before the film goes on floors”.

If the rumours are true, it will be Akshay and Radhika’s first time working together. It’ll be fascinating to see if this new Jodi succeeds in making an impression on the crowd. Akshay Kumar is now enjoying the success of his recent film Bachchhan Paandey. Aside from that, he has a number of exciting films in the works, including Prithviraj alongside Manushi Chhillar, Raksha Bandhan, Ram Setu, and OMG 2.

Also Read: Despite 30 years in the industry, Akshay Kumar describes himself as a “greedy sort of workaholic”