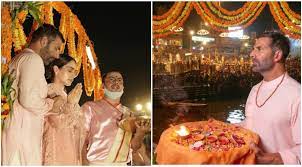 On June 3rd, the film Samrat Prithviraj, starring Akshay Kumar and Manushi Chhillar, will be released.

Samrat Prithviraj, starring Akshay Kumar and Manushi Chhillar, will hit theatres shortly. Dr Chandraprakash Dwivedi’s historical drama is one of the most anticipated films of the year. The trailer was released a few days ago, and it garnered a lot of great feedback. Additionally, the filmmakers released a second version of the film earlier today.

Prior to the release of their movie, Akshay and Manushi are busy promoting it. In the midst of all of this, the performers travelled to Varanasi to conduct the evening aarti in the holy city. The duo took to social media to post photos from the event with their fans and followers. Have you had a chance to view them yet?

A few moments ago, debutant Manushi and Akshay turned to their individual Instagram accounts to share a few images from their journey to Varanasi, the holy city. Both actors are clothed in attractive ethnic attire in the images. Khiladi Kumar donned a peach-coloured kurta, and Manushi matched him in a peach-coloured salwar suit.

Her hair was pulled back into a neat bun with a centre parting, and she wore soft glam makeup. They may also be seen doing the evening aarti at the Ganga Ghat with their director in other photos.

Fans and followers rushed them with likes and comments as soon as they posted the photographs on Instagram.

When it comes to Samrat Prithviraj, the film is planned to enter theatres on June 3rd. The film is based on Akshay Kumar’s portrayal of Rajput warrior king Prithviraj Chauhan of the Chauhan dynasty, and will also include Miss World 2017 Manushi Chhillar in the character of Sanyogita.

Also Read: Prithviraj: For the film, Aditya Chopra rebuilt 12th century Delhi, Ajmer, and Kannauj from the ground up