Bollywood Society » As she goes to a new location, Karisma Kapoor shares a tranquil photo
Gossip

As she goes to a new location, Karisma Kapoor shares a tranquil photo 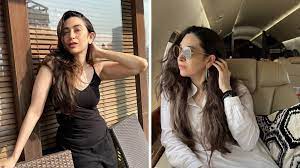 Karisma Kapoor’s charisma and elegance are enough to make everyone fall in love with her, despite the fact that she hasn’t seen on the big screen in a long time. The actress is really attractive, and her superb visuals make it tough to take your gaze away from her. Karisma Kapoor updates her social media accounts on a regular basis with photos and videos to give her fans and followers an insight into her everyday life. On Monday, when she was flying someplace, she posted a stunning photo on her Instagram storey. So, are you prepared to be enchanted?

The image was stunning, captivating, and enthralling. For her airport appearance, Karisma Kapoor chose a comfy yet elegant white outfit. She completed the ensemble with a pair of elegant sunglasses and large hoop earrings. Her makeup was simple yet effective in highlighting her beautiful features. In the photo, she can be seen sitting gracefully while looking out the plane window. “Off and gone…” Karisma commented with the photo. Well, we absolutely can’t wait for forthcoming adventures!

Meanwhile, Karisma Kapoor was photographed with her sister Kareena Kapoor Khan and her two young sons, Taimur and Jeh, on Monday. Kareena and Karisma Kapoor are one of Bollywood’s most talked-about sister duos and are extremely close. Karisma was photographed caressing Jeh and was even photographed tugging his cheeks as Kareena tenderly cradled him in her arms. Taimur, meantime, stood close to his mother and aunt, looking smart and charming.

Trolls, according to Neena Gupta, judge women based on their clothing