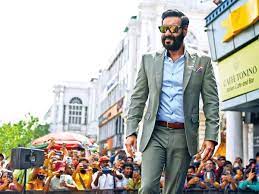 Ajay Devgn, who is set to play Captain Vikrant Khanna, a commercial pilot in his upcoming directorial ‘Runway 34,’ believes that there is something about characters who wear uniforms that he has an affinity for.

Ajay has worn uniforms in films like as ‘Singham,’ ‘Gangaajal,’ and ‘LOC Kargil.’ In a statement, he remarked when asked whether he ever felt pressure when wearing any of these outfits, “I have always been drawn to men in uniform. Be it my cop avatar in ‘Gangaajal’ and the iconic ‘Singham’; uniforms have a special significance.”

However, he believes that things will be a bit different this time around with ‘Runway 34,’ because a pilot’s clothing is more stylish and has a touch of elegance to it, he noted. “Of course, the pilot’s uniform has more glamour associated with it. But believe me, along with the glamour comes a huge responsibility. A pilot is actually a demi-God for the passengers who repose blind faith in him/her while they fly. I was fully aware of what this uniform brings with it. Neither Rakul Preet Singh(my co-pilot) nor I took the uniform lightly.”

Talking about the prep he did, he shared, “We trained for days before shooting to get into the character. We had a real pilot on set to coach us. We familiarised ourselves with the cockpit; learnt the use of the numerous buttons on the panel. It was a mini-coaching class and we did not take it lightly. We also got lessons from the ATC (air traffic control). ‘Runway 34’ is a film based on true incidents and we needed to keep the authenticity.”

‘Runway 34’ also stars Amitabh Bachchan, Rakul Preet Singh, Boman Irani, Aakanksha Singh, and Angira Dhar and is based on actual events. Ajay Devgn produced and directed the picture, which will be released in theatres on April 29.

Also Read: In the wake of Akshay Kumar’s apologies, Ajay Devgn weighs in on promoting the elaichi brand

To promote their film Bhool Bhulaiyaa 2, Kartik Aaryan and Kiara Advani dress up in eye-catching outfits