Bollywood Society » After claiming she couldn’t do Koffee with Karan Johar again, Twinkle Khanna enjoys meals with him
Gossip

After claiming she couldn’t do Koffee with Karan Johar again, Twinkle Khanna enjoys meals with him 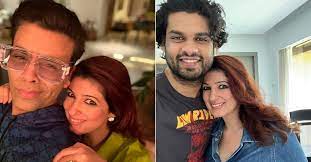 Twinkle Khanna is a one-of-a-kind actress. The actress-turned-author is capable of both taking and cracking a joke on herself. Her creative captions constantly make news and keep her followers engaged. Her Instagram page is definitely one of the funniest! When she went on Koffee with Karan with husband Akshay Kumar, we first witnessed her outspoken, open, and humorous side. When it comes to Koffee with Karan, Karan Johar is preparing for the seventh season, and fans are ecstatic. Twinkle had just mentioned in a post a few days ago that she couldn’t ‘Koffee with Karan.’

After all of that excitement, she shared a cute photo with KJo.

Karan and Twinkle were very gorgeous in the photo. The two were grinning ear to ear. She also included a photo of herself and her cousin Karan Kapadia. Twinkle, of course, had the greatest caption on this post. She stated, “A Karan for dinner last night and a Karan for lunch this afternoon. If only there were a Karan that was just right for dessert 🙂 Love you both @karankapadiaofficial and @karanjohar”

The post went viral because followers were overjoyed to see two incredible individuals together.

Meanwhile, Twinkle Khanna uploaded a photo of herself sipping tea in response to her earlier post about Koffee with Karan. We could only see her glittering eyes and her hair fastened in roller pins in the photo. Twinkle stated, “It’s a monochromatic photo, and I’m sharing it. “Just rolling with it! On a set I am prone to mumbling, ‘Shoot me now,’ though I secretly mean with a Nerf gun and not a camera, but then there are days like these when it’s all fun and games. Hmm.. Can’t do Koffee with Karan again but Tea with Twinkle may not be a bad idea after all:) #behindthescenes #shootmenow.”

Also Read: Twinkle Khanna is photographed with her son Aarav in a casual outfit

Disha Patani is the ideal dog mom, strolling about with her pet in a stroller.