Bollywood Society » Actor Dharmendra was brought to the hospital and is already recovering, according to reports
Gossip

Actor Dharmendra was brought to the hospital and is already recovering, according to reports 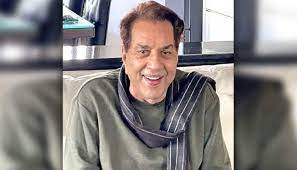 According to sources, veteran actor Dharmendra was brought to a private hospital in Mumbai. Dharmendra was last seen in the action-comedy Yamala Pagal Deewana Phir Se, which was released in 2018. Navaniat Singh directed the film, which also stars Bobby Deol and Sunny Deol.

According to the Indian Express, the legendary actor became ill last week. According to the source. “But he is getting better. He is doing fine. He will be given a discharge in a couple of days, by Tuesday or so. There’s nothing to worry about.”

To be sure, Dharmendra remains active on social media, and only last month, he released a video on Twitter that gave a funny twist to his popular song from Sholay – ‘Yeh Dosti Hum Nahi Todenge’ – and it won hearts for all the right reasons. A bunch of men attempted to sit on a bike together in this amusing video. While four of them had been able to seat on the bike, the fifth was observed attempting to do so. However, the three of them (excluding the rider) embraced the fifth person in their arms as they drove away, setting a great example of friendship. The video came with a background music of Dharmendra and Amitabh Bachchan’s iconic number ‘Yeh Dosti Hum Nahi Todenge’. The legendary actor captioned the video as, “Dosto…… Dosti ki haden nahin hoti ……”