Who is Anne Hathaway? 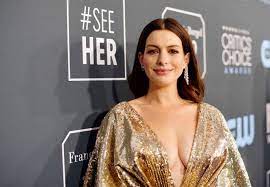 Anne Hathaway is an actress from the United States. She has won several awards, including an Academy Award, a Golden Globe Award, and a Primetime Emmy Award, and she was one of the highest-paid actresses in the world in 2015. Her films have made over $6.8 billion worldwide, and in 2009, she was named to Forbes’ Celebrity 100 list.

Hathaway attended Millburn High School in Millburn, New Jersey, where she was a part of numerous productions. She was cast in the television series Get Real (1999–2000) as a teenager and made her cinematic debut in the Disney comedy The Princess Diaries as the protagonist (2001). With the 2005 dramas Havoc and Brokeback Mountain, Hathaway made the shift to adult roles. Her biggest commercial hit to that date was the comedy film The Devil Wears Prada (2006), in which she portrayed an assistant to a fashion magazine editor.

She was nominated for an Academy Award for Best Actress for her role as a recovering addict with mental illness with in film Rachel Getting Married (2008). She went on to star in the box office hits Bride Wars (2009), Valentine’s Day (2010), Love & Other Drugs (2010), and Alice in Wonderland (2010).

In 2012, Hathaway played as Selina Kyle in The Dark Knight Rises, the last episode in the Batman trilogy, which became her highest-grossing picture. In the same year, she earned an Academy Award for Best Supporting Actress for her performance as Fantine, a prostitute dying of disease, in the musical love drama Les Misérables.

She then starred as a scientist in the science fiction movie Interstellar (2014), as the owner of an online fashion site in the comedy The Intern (2015), as a haughty actress in the heist movie Ocean’s 8 (2018), as a con artist in the comedy film The Hustle (2019), and also as an evil witch inside the fantasy comedy The Witches (2019). Hathaway has also sung for soundtracks, performed on stage, and hosted events, as well as won a Primetime Emmy Award for her voice performance in the comedy The Simpsons.

Hathaway is a supporter of a number of philanthropic organisations. She is on the board of the Lollipop Theatre Network, which provides films to children in hospitals, and as a UN Women goodwill ambassador, she works for gender equality. She is married to Adam Shulman, an actor and businessman, with whom she has two boys.

Also Read: Who is Matthew McConaughey?

All that you must know about the movies of Matt Damon

All that you must know about the movies...

Kangana Ranaut has been summoned by a Delhi...