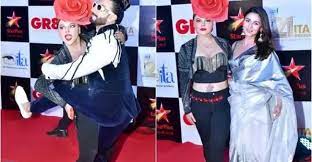 We all know Ranveer Singh is a force to be reckoned with. When he leaves the house, he makes it a point to brighten up his surroundings. Well, he’s one of the paparazzi’s favourites since his high energy levels make everyone around him happy. Rakhi Sawant has to be the only person who can equal his level of intensity or craziness. No, we’re not saying it, but the internet is! Ranveer and Rakhi accidentally bumped into one other on the red carpet of ITA last night, and what ensued was a bizarre encounter.

Rakhi Sawant and Ranveer Singh are seen in the video getting all ecstatic as they run into them other. Both Ranveer and Rakhi are wearing black outfits. These two certainly entertained the media and their supporters there, from embracing each other to executing the legendary Tatad Tatad to recreating the movie Pushpa’s stride. Netizens were giddy with anticipation to witness these two in action. One user wrote, “Ram milayi jodi..lag rahi hi ek dum”. Another user wrote, “They both have equal level of energy and madness.”

Meanwhile, on the job front, Ranveer Singh will next be seen opposite Ali Bhatt in Karan Johar’s directorial debut Rocky Aur Rani Ki Prem Kahani. The movie’s Delhi schedule was just completed by the crew.

Rakhi Sawant was most recently seen on Bigg Boss 15 with her husband Ritesh. She recently used her Instagram account to announce her separation from her spouse.