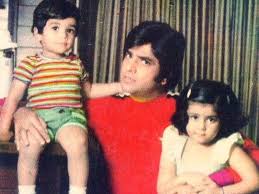 Ekta Kapoor, who is 47 years old, is celebrating her birthday tonight.

Today is Ekta Kapoor’s birthday, which falls on June 7th. Tusshar Kapoor, the producer’s brother and an actor, turned to social media to commemorate the occasion by sharing a bevvy of images from their youth.

A newborn Tusshar is seated close to a little older Ekta Kapoor in the first photo, leaning against her. Both toddlers are clothed in gorgeous baby clothing in red and white tones. Ekta has a lovely ponytail, too. The sibling duo appears to have grown up a little in the next photo.

They are standing next to their father, Jeetendra, who is holding both of his children close to him. The second and final shot is from their adulting days and is very recent. Tusshar is seated in a chair in front of Ekta, who is seen standing with an aarti thali. For the photo, they both grinned and glanced at the camera.

Ekta, the birthday lady, couldn’t help but respond to Tusshar’s heartfelt birthday message as soon as she saw it. She wrote in the comments section, “Thank you my Tushki ! love you…(red heart emojis)”.

Also Read: What are the most popular movies of Bollywood actor Kunal Kemmu?

Brahmastra: Ayan Mukerji describes the film as a “dream project” that took him ten years to bring to life